Ionizing radiation is a “showstopper” for long-term crewed space missions because it can lead to disease and damage of electronic equipment. [1] Heavy materials like lead (Pb) and polyethene are effective but costly to transport. Hydrogen and water are options but are in demand for other uses on crewed missions. What if there was a substance that could be transported to mission destination at only a few grams and expanded with in situ resources to make millions of tons of radiation shielding material? What if it was structural and thermally insulative as well? There may be, and it’s alive.

Combining the work of medical researchers, astrobiologists, material scientists, physicists, and architects, redhouse is making this living material. Researchers on our team have studied the processes of fungal radiosynthesis- the natural transduction of ionizing radiation into benign forms of energy - for over a decade. [2] We’ve observed that melanin-rich fungi can shield from ionizing radiation, including electromagnetic and particle radiation, at efficacies comparable to lead and twice as effective as charcoal. [3]  The organisms can be extremely radioresistive, demonstrating survival at 1.6 million times a dose considered lethal to humans. [4] 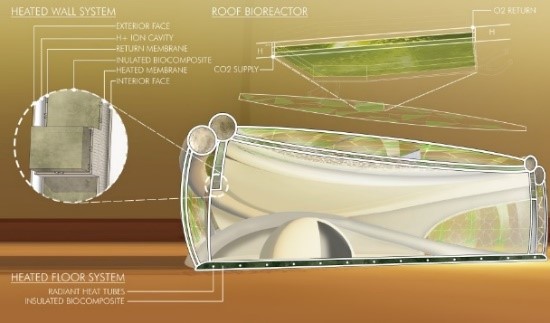 The team is currently working with NASA to develop building materials, and indeed entire structures made from fungal composites that grow in situ. [5] Research on the mechanical properties and bio-performative aspects like hydrogen and oxygen production are underway, but the radiosynthesis capabilities of the bio-composite materials need further study. We have sent samples of our materials into space as part of the MISSEs 12 and 13 missions and they are currently being exposed on the outside of the ISS in both the zenith (sun facing) side and wake (earth facing) side.  Since these are biological materials with low atomic numbers, it is expected to produce less secondary radiation as compare to lead and aluminum.

The process for making fungal composites is done by growing filamentous saprophytic fungi on biomass substrates that can become fused at a cellular level. Our team has demonstrated composites that have compressive strength superior to concrete, thermal resistance characteristics superior to fiber-glass batt insulation, and fire resistance equivalent to type-X gypsum board, i.e. construction industry standards. [6] Our biomaterials are also unique as it can be optimized to produce melanin, a known radiation absorber and attenuator [7].  The melanin-mediated radioprotection of living cells results from a combination of Compton scattering by the high number of electrons in its macromolecules, energy attenuation of photons as a consequence of high angular scattering caused by the geometry of spheres, and quenching of free radicals generated by radiolysis of water. [8]
Low cost radiation attenuating materials could have a much broader impact. Disasters like Fukashima and Chernobyl could have benefited from containment materials built around the disaster sites. Healthcare providers, patients undergoing radiotherapy, and the military could benefit from having access to low cost, low carbon material as well, but the bigger impact may be in the proliferation of bioterials in general. redhouse’s humanitarian bioterial projects involve creating food security, jobs, and low-cost dignified shelters in the developing world and remediating dangerous chemicals within the built environment in the redeveloping world. For more information on our designs for NASA’s NIAC program see: https://www.redhousestudio.net/pages/research/mars-habitat-designs